BMW has confirmed that the next 4 Series Coupe will be officially revealed on 2 June. Ahead of that, the firm has revealed a teaser image of the upcoming coupe hinting at the radical design overhaul.

As expected, the nose of the new BMW 4 Series will be dominated by a pair of large, vertically oriented kidney grilles, quite unlike the current 3 Series saloon it shares its platform with. As such, BMW will employ a new strategy with its new coupe. Until now, it’s been intrinsically linked to the 3 Series, but the brand will clearly market the newcomer as much more than a sibling to the saloon, with an entirely separate design. No other information has been published.

The car is being pushed through the final stages of its development cycle, with the latest spy shots showing a lightly camouflaged test mule undergoing handling assessment at the Nurburgring. It will go on sale later this year, with four and six-cylinder power anticipated. A convertible will follow, as will a hot M4 version.

BMW recently released some official images of the new 4 Series Coupe – and while the car in those pictures wears heavy camouflage, our spy photographers have spotted a range of scantily clad test mules elsewhere – giving us a good indication of the car’s styling. The big talking point is the car’s new front end, which will feature a pair of huge full-height kidney grilles.

Elsewhere, the 4 Series Coupe’s styling is likely to be almost identical to the BMW Concept 4 from the 2019 Frankfurt Motor Show. Expect it to arrive with a pair of slim LED headlamps, flared haunches, and a squared-off tail. 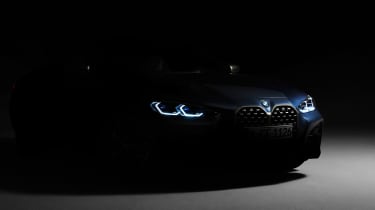