The all-electric Volvo XC40 Recharge Pure Electric P8 is on sale now, priced from £53,155 with first deliveries expected in early 2021. The crossover is the Swedish brand’s first EV, which has been tasked with taking on the likes of the Jaguar I-Pace, Hyundai Kona Electric and the forthcoming Tesla Model Y.

There’s a caveat for UK buyers, though. Changes made in the Government’s most recent budget mean that the XC40 Recharge won’t be eligible for the UK plug-in car grant. From Thursday 12 March 2020, the grant was only made available for electric vehicles which have a price-tag lower than £50,000 – and the payout was lowered by £500 to £3,000.

The electric XC40 also heralds the arrival of Volvo’s new sub-brand, called Recharge, under which all the brand’s chargeable models – meaning plug-in hybrid and fully electric vehicles – will now sit. Five more electric models will join the XC40 Recharge over the next five years, with Volvo aiming for electric vehicles to account for 50 per cent of its sales by 2025.

Like the standard XC40, the Recharge P8 is based on Volvo’s Common Modular Architecture (CMA). It’s powered by a 78kWh battery pack, mounted under the SUV’s floor, which drives an electric motor on each axle. Total power output is a claimed 402bhp and 660Nm of torque, which Volvo says provides a 0–62mph time of 4.9 seconds. 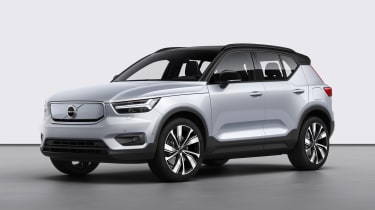 Volvo also claims that the electric XC40 can travel up to 249 miles on a single charge – and that topping up using a standard 11kW domestic wallbox charger will refill the battery from empty in just under eight hours. When plugged into a commercially available 150kW fast-charger, a 0–80 per cent charge takes just 40 minutes.

The battery packs are mounted along the SUV’s spine, which Volvo says bears no impact on the vehicle’s cabin or storage space. Also, due to the lack of an internal combustion engine there’s now an extra 30-litre storage bin under the XC40’s bonnet.

Visually, the XC40 Recharge is marked out by a blanked off radiator grille – which Volvo says improves the car’s aerodynamics – and “Recharge” branding embossed into the car’s blacked-out C-pillar. But these minor revisions (as well as the lack of an exhaust system) are the only differences setting it apart from the combustion engined model.

The XC40 Recharge’s interior is carried over from the rest of SUV’s line-up – but a new infotainment system, powered by Google’s Android operating system, makes an appearance for the first time. As such, services such as Google Maps and Google Assistant are built-in to the SUV’s touchscreen, without needing to connect an Android smartphone.

What do you make of the all-electric Volvo XC40 Recharge Pure Electric P8? Let us know in the comments section below…