This shadowy teaser image is our first official look at the facelifted Hyundai Santa Fe. The Korean brand’s revised flagship SUV will be officially unveiled this summer, sporting a range of cosmetic and mechanical updates, before going on sale in the UK in September.

Hyundai has also confirmed that the new Santa Fe will feature an all-new platform, which is highly unusual for a facelifted model. The SUV will be based on the brand’s third-generation vehicle platform, which also underpins the US- and China-only Sonata saloon. 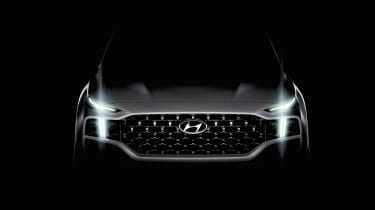 The Korean brand says its upgraded underpinnings offer better handling and improved crash safety, thanks to its extensive use of high-tensile steel and its redesigned crumple zones. Refinement should also be boosted, with Hyundai adding additional sound dampening in vibration-sensitive areas such as the engine bay and suspension towers.

The new platform will also make the Santa Fe compatible with Hyundai’s latest range of hybrid and plug-in hybrid powertrains. Specific details about the powertrains are yet to be confirmed, but we expect both will be based on the firm’s existing 1.6-litre four-cylinder petrol unit – which is already used in the Ioniq Hybrid hatchback and Kona Hybrid crossover.

Interior revisions should mirror the platform shift, with the updated Santa Fe featuring the same 10.25-inch infotainment screen and 12.3-inch digital instrument binnacle as the new Sonata. We expect the update will also bring a range of new trim and upholstery options, as well as a few extra paint finishes and alloy wheel designs.

What do you make of the new Hyundai Santa Fe? Let us know in the comments section below…