Tesla is aiming to launch a new low-cost, long-life battery pack for the Model 3 in China, which could bring the cost of its electric vehicles in-line with their combustion-engined competitors, reports have suggested.

The upcoming battery pack is said to have a life-span of one million miles before needing to be replaced. Once spent, the batteries could be used to store power for the National Grid.

Final specifications for the new battery packs are yet to be confirmed. However, Reuters has reported that the cells will make use of low-cobalt or cobalt-free chemistries, as well as chemical additives and coatings that will allow the battery to store more energy for longer and make it more resistant to the strain of rapid charging. 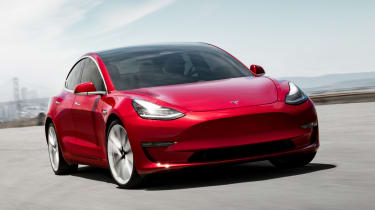 The brand’s CEO, Elon Musk, has promised to unveil Tesla’s latest development in battery technology in a dedicated event later this month. However, the coronavirus pandemic and current global travel restrictions could push the event back to later this year.

Tesla will also introduce a new, heavily automated battery manufacturing process that will reduce labour costs and increase output, to feed demand in growing markets such as China. The cells will be constructed in the firm’s upcoming “Terafactories,” which are touted to be 30 times larger than the company’s existing Gigafactory near Reno, Nevada.

All of these plans will fuel Musk’s ultimate goal of becoming a global energy supplier. Tesla recently applied for a British energy provider license, which could see the company support the National Grid using the same batteries as its electric vehicles. Tesla could also introduce its energy management software, Autobidder, to UK homeowners as part of the process.

What do you make of Tesla’s future battery technology plans? Let us know in the comments section below…