Car makers are moving towards adaptive LED headlights and even laser units, but the humble halogen bulb is still the most common headlight.

The technology has survived thanks to continued development of these filament-based lamps. Aftermarket performance bulbs started out promising 30 per cent more light within the beam than a standard version, but that figure is now at 150 per cent.

As a result, our Figure of Merit (FOM) calculation – which combines light readings at two points 50 metres in front of the car, and another 75 metres ahead – has trebled. So which is the best halogen bulb? We went to Germany and Osram’s new light tunnel to find out with 10 top performers.

We tried twin-filament, dip and beam H4 bulbs on our revised test, which places less emphasis on the Figure of Merit, because this is alignment dependent. As well as the FOM, we looked at beam length and measured the brightest spot from our Vauxhall Viva headlamp unit.

The results, an average of two bulbs, were converted to percentages so performances are accurately reflected. These were then added up to find the winner. We also tested maximum output to ensure all fell within ECE regulations.

Price per pair played a small part in our calculations, because like tyres, bulbs are safety items that should be bought on performance. We purchased our samples online or picked them randomly from multipacks to avoid filtering.

The bulbs neatly split into three groups, with Osram at the top. Bosch, GE and Halfords are a step behind and hard to separate, but the former two take the final podium places ahead of the pricey Halfords pair.

The last time we tested H4 bulbs Osram was some way behind the best and lacked a 150 per cent offering. This Next Generation version of the Night Breaker Laser is the German maker’s 150 per cent response. There’s some fancy laser etching on the blue bands on the glass that are used to control the light, but it’s the beam that secures its win here. It was noticeably bright with a wide hot spot and a sharp cut-off. A clear victory in the absence of arch-rival Philips.

Our next trio delivered virtually identical performances and we suspect they all come from the same Hungarian source. Despite boasting only a 120 per cent boost, this Bosch matched the Halfords and GE in the light tunnel with a 149 FOM rating, and it also topped the trio in beam length. The cut-off line lacked sharpness on the tunnel wall, but the light spread was smooth. Bosch might have pushed Osram harder if our two samples had been more consistent.

These are likely to be the last GE bulbs we test, because the company will soon switch to its original Tungsram name following an ownership change. The Hungarian producer won this test with it 130-plus bulb last time around, but this 150 version will have to settle for a podium. There was a similar lack of sharpness to the cut off that we saw with the Bosch (left), plus another relatively close hot spot. It was still good enough to deliver a better FOM result, at 150.

The chain’s regular ‘buy one get one free’ winter offer on bulbs wasn’t active as we put together this test, so this pair look very expensive when compared to rivals. The Alite-branded bulbs actually delivered a better result than our Recommended bulbs by a small margin, but that price dropped Halfords off the podium. However, they are still worth considering thanks to the light tunnel performance, which delivered a win in the maximum brightness test and a 148 FOM rating. 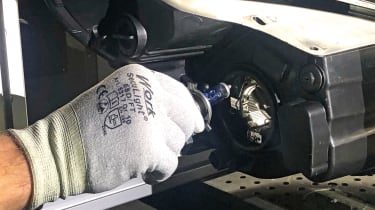 Another 150 per cent Alite bulb, like the Halfords, but this one-time front-runner couldn’t match its previous performance. To the eye the hotspot looked a little close to the car, giving a 128 beam rating. The Xenon150 got closer to the pacesetters on its test debut two years ago, but it struggled for maximum brightness in the beam measurement here, finishing some 40 per cent behind the Night Breaker Next Generation.

Part of the Autobulbs Direct online retail range, these ‘perfect vision in a tube’ bulbs had Megalite baseplate branding. Our tests would suggest there’s ‘better’ perfect vision to be had elsewhere. The pair only managed to top the Lucas in the FOM rating, some 70 points behind the Osram, and that could be seen in the light tunnel, where the hot spot of light was relatively low compared to the cut off, resulting in a poor 75-metre result. It fared better in the other tests, but was a step behind the top performers.

If a sub-£20 price wasn’t tempting enough for those on a tight budget, Powerbulbs’ site was giving away a second pair free with each order at the time of the test. Powerbulbs says these plus-120 per cent bulbs are built to German specifications and standards, but that low power hike saw it close to the bottom of the results table. It finished last in the maximum beam brightness. It was also sixth in the FOM rating on 110 and a touch patchy in the light tunnel, with not much of a focus of light around the hotspot.

A cracking Amazon price will tempt some, as well as that promise of plus-130 per cent performance, but there are better ways to spend your money on headlamp bulbs. The beam’s hot spot was low, hurting the crucial 75-metre reading in our FOM beam which saw it finish bottom of the table on 100. Beam length was also the worst on test at 85 metres, some 10 metres shorter than the winning Osram.

The specifications for today’s halogen bulbs were set back in the sixties and seventies, when manufacturing wasn’t as precise as it is today. To cope, generous tolerances were allowed, and makers now exploit these to give extra performance, taking outputs and build restrictions to the extremes of what is allowed. One area is light output, which we check to ensure bulbs remain in compliance. Both our RacingVision samples exceeded the maximum by some margin and are therefore not rated.

An Osram brand, these Neolux bulbs are made in China with ‘German technology’. They are not rated for the same reason as the Philips, with one bulb over the maximum brightness limit and the other right on it. That’s a surprise, because they promise only 50 per cent extra light and the other results would have placed it mid-table, with only a poor maximum beam brightness really revealing its low-power roots.