The MINI Clubman is a niche offering that’s better considered alongside premium hatchbacks than conventional small estates. It is a MINI that can genuinely be used as a proper family car, all the while retaining much of what makes smaller MINI models so great to drive. Strong engines and an engaging, composed chassis are highlights, while refinement and comfort are impressive. Many will be sold on looks alone, the Clubman is a great car all-round.

The MINI Clubman for sale today uses a name from the classic Mini archive, and it has plenty or retro design cues, but there are also plenty of modern touches on board. While the Clubman is nominally an estate version of the standard MINI five-door hatchback, it can't be used as you would a large estate car – think of it instead as a quirkily designed hatchback with a unique double door arrangement at the back and you won't be disappointed with its carrying capacity.

The Clubman received an update in 2019 that added refreshed looks (including Union Jack tail lights), the same simplified trim range as other MINI models and, at the top of the range, a new 302bhp engine for the performance JCW model that’s shared with the latest BMW M135i.

For the rest of the range, power now comes courtesy of two petrol engines. A 1.5-litre three-cylinder features in the Cooper with 134bhp, while a 2.0-litre four-cylinder unit appears in the Cooper S with 189bhp.

Each of these engines can be had in combination with one of three trims – Classic, Sport or Exclusive. These packs largely affect styling and interior trim, along with basic standard equipment. Classic is the entry point with minimal extras and 16 or 17-inch alloys depending on engine, Sport brings some racier styling plus 18-inch alloys, cruise control, parking sensors and sport suspension, while Exclusive cars get lots of leather trim plus cruise control and 18-inch alloys.

Front-wheel drive is standard across the range, and while MINI offered a four-wheel drive Clubman ALL4 for a little while, this is not currently available. 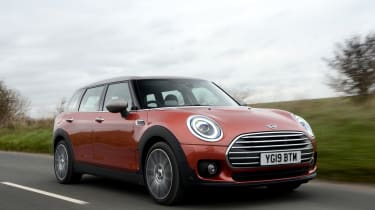 In terms of rivals, the MINI Clubman doesn't really have any direct competition. If you want a small estate, then there's not much choice this side of the Skoda Fabia Estate, or larger estate versions of hatchbacks. But all of these cars – including the Fabia – will have far bigger boots. Instead, we'd recommend focusing on the premium quality of the Clubman. In that regard, the Clubman is a retro-styled alternative to premium hatchbacks such as the VW Golf, Audi A3 or even the closely related BMW 1 Series.

For an alternative review of the latest MINI Clubman visit our sister site carbuyer.co.uk