The Citroen C5 Aircross has the ingredients to be a hit, and Citroen certainly deserves praise for offering SUV buyers something that’s different and innovative, especially in such a competitive and crowded part of the market. So it’s a great shame that it doesn’t all come together better.

We’re disappointed by the ride comfort and interior quality, especially as expectations were so high for the former thanks to the Aircross’ innovative suspension, and the latter’s design looks like such a breath of fresh air. We do like the individual style and the amount of equipment included as standard, though.

Overall, as the flagship for the Citroen range, it doesn’t quite have what it takes to beat the best and match the smaller C3 Aircross as a class leader.

Aircross is Citroen speak for SUV, and was first used on the C-Aircross concept shown at the Shanghai Motor Show back in 2015. Although we’re already familiar with the smaller C3 Aircross, that original concept car actually previewed this larger C5 Aircross model.

The distinctive looks of the C5 Aircross are a real attribute, as the car must compete in a particularly hotly contested mid-size SUV market segment.

Its rivals are the likes of the Nissan Qashqai, Skoda Karoq and SEAT Ateca but also larger 5-seat models like the Nissan X-Trail, Toyota RAV4 and Ford Kuga. Then there’s the Peugeot 3008 and 5008 which are important here, as they are the sister cars of the C5 Aircross – built on the same PSA Group platform, and sharing elements like engines, gearboxes and some of the technology under the skin. The C5 is closer in size to the 5008 but, like the 3008, doesn’t offer 7 seats.

With the demise of the Citroen C5 saloon and estate, the C5 Aircross sits right at the top of the firm’s UK line-up. As a result, it pioneers the Citroen Advanced Comfort programme, which includes suspension with Progressive Hydraulic Cushions and Advanced Comfort seats. The latter means that the rear features three individual, sliding, incline-adjustable and folding rear seats. While there’s no seven-seat option, it does mean that rear-seat space is generous. 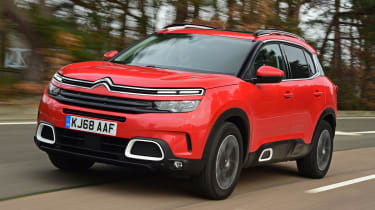 To keep things simple, Citroen has opted to offer just three trim levels on the C5 Aircross: entry-level Feel, mid-range Flair, and top-spec Flair Plus. Feel models come with a choice of 1.2 PureTech 130 petrol or a 1.5 BlueHDi 130 diesel. A six-speed manual gearbox is standard, while the diesel model is also available with an eight-speed automatic transmission.

Flair and Flair Plus models have the same choices, with the addition of an eight-speed auto option for the petrol model and a more powerful 2.0 BlueHDi 180 diesel engine, offered solely with the auto transmission.

Although Citroen claims a healthy 230mm ground clearance for the C5 Aircross, four-wheel drive isn’t even on the options list. However, all models include the same Grip Control system as offered by the Peugeot 3008 and 5008, which is effectively a traction control system that can be adjusted to suit different terrain.

For an alternative review of the latest Citroen C5 Aircross SUV visit our sister site carbuyer.co.uk