Wiper blades are a crucial part of your car that are often overlooked until it’s time for an MoT test. They have to be dragged across the glass in front of your eyes thousands of times a year in all weathers, clearing bugs in the summer and snow in winter. And yet they degrade so slowly that we often don’t notice as they get noisier and start to smear.

Changing them can be a revelation, making your vision clearer and reducing irritating judder. Most modern cars use ‘aero’ blades, which are held onto the screen better at speed and should give a more even wipe. They’re easy enough to fit yourself with the help of a YouTube video if you’re not sure how they work on your car. But which replacement should you choose from the bewildering array on offer? We tested six to find out.

We fitted 22-inch (550mm) aero blade-style wipers to a Land Rover Discovery 4, which uses the common U-shaped hook fitting. We looked for the blades that wiped most effectively  in all conditions, so tried them in the dry, using the washer jets, and then simulated different rates of rain using a hose.

We also checked for any juddering or other noise and tested for lifting at motorway speeds. Finally, we considered the ease of fitting, and value. All prices are taken from online sources and are for a pair of blades, unless otherwise stated.

The Bosch Aerotwins are still our favourite wipers, with great quality and performance, plus a lower price now. They might be a few pounds more expensive than the others here, but you’ll never regret spending the extra because they are well made, easy to fit, quiet in use, and give a great wiping performance. The Aerowipers and innovative Michelins fought for second place, so it came down to price to split them – and the less expensive Aerowipers won.

If budget is your main concern, the Wipacs deserve a mention; less than £16 for three wipers is great value.

This is the fifth win in a row for the Bosch Aerotwin wipers; none of their rivals can beat them and they’ve had a price cut since our last test, too, taking them below £20.

The locking fitment felt far more secure than some of the others in this test, and they were the quietest once wiping as well. In all conditions they moved water off our screen effortlessly and without leaving smears, while remaining whistle-free and firmly pinned to the screen at motorway speeds. We think they’re well worth the extra few pounds over the cheaper offerings here.

It was a close run thing between the Aerowipers and the third-placed Michelins, but the lower price of these ‘own brand’ blades from wiperblades.co.uk clinched it. 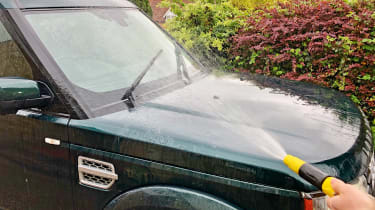 There’s no need to be frightened that these units will be of lower quality than the branded wipers from more well known makes, because they cleared our screen as effectively and quietly as anything except our Best Buy Bosch. QR codes on the packaging link to video tutorials on how to fit them, and they slotted in securely to our Land Rover’s arms. Our only real gripe was that the connector looked a little scruffy and unfinished once fitted.

Rather than the one-piece flat blades of every rival here, the Michelins use an old-fashioned bridged wiper to help it wrap round a curved screen, but enclose it in a soft, rubbery case for better aerodynamics and less wind noise. That might seem rather antiquated, but the blades did a decent job of clearing water and were also quiet. They did look a little chunky when fitted, though.

The box had six fittings for various cars, and the blades slotted straight on to our hooked arm easily. But they didn’t feel as secure as the Bosch or Aerowiper and the lack of a cover on the connector made it look as though a part had fallen off.

There’s no denying the value of these blades; they’re among the cheapest here, and the price includes a replacement for the rear windscreen wiper.

They were the closest to the original blades on our Land Rover, with a securing clip to hold them in place and an identical design. But the plastic felt flimsy and the blades left a slight smear in the wettest conditions. They were noisier, too, producing a more audible clack when the wiper changed direction. Still, they’re not badly priced if your budget is tight.

Despite having a well known brand name on the box, these wipers are the cheapest in our test, at less than £15 for a pair. They looked good too, but once we started prodding them, they seemed like a product made to a budget, with a plasticky, rather than rubbery, feel to the blade edges.

Once fitted, the concern continued, with no double lock on the fitment to secure the wipers to the arm. This budget feel seemed to translate to the wiping performance, since the blades left smearing and one small patch in front of the driver’s eyes unwiped.

These unbranded blades are one of the most popular choices on Amazon and described as a “premium OE direct replacement”, so we were keen to try them. At around £20, they have a top-end price compared to the rivals here, but this does include a rear wiper.

However, they didn’t feel like a premium product, arriving loose in a box with poorly fitted parts. Once reassembled they did actually resemble the original Land Rover wipers, with a locking tab over the arm. Their wiping performance was better than the Lucas’, but the driver’s side blade hit the bodywork at the top of each wipe, causing an audible clunk. Irritating.