The Citroen C3 competes in one of the most hotly contested areas of the car market: superminis. So it’s going up against the likes of the Ford Fiesta, Vauxhall Corsa and Volkswagen Polo.

In truth, though, the Citroen doesn’t really try to take on any of those three established names in their respective areas of strength. It doesn’t claim to handle as sweetly as the Fiesta, or be as refined as the Polo. Citroen’s trying to move away from heavy discounts, too, so it probably won’t be as cheap to buy as a Corsa, either.

Instead, Citroen has tried to embody one of its core brand values with the C3: comfort. That’s not to say it has some flash, expensive suspension set-up – indeed, look below the funky exterior and you’ll find lots of the same mechanicals that underpinned the last C3 – but the engineers have tried to dial in as much bump absorption as possible, and worked to make the car a relaxed place to be when it’s on the move.

In lots of ways they’ve succeeded – which means that the C3 merits consideration by anyone who’s in the market for a supermini.

While the Citroen C3 used to be an also-ran in the supermini class, the current car is a strong contender for overall honours in the sector. It's the automatic choice for buyers wanting a funky-looking small car at a good price, while it has also spawned the C3 Aircross as its SUV counterpart.

The third generation C3 arrived in 2016, and instantly erased memories of its disappointing predecessors. It comes in Feel, Origins and Flair Plus trims, while special models such as the Elle and Origins (which celebrated Citroen's 120th anniversary in 2019) come and go from the range. 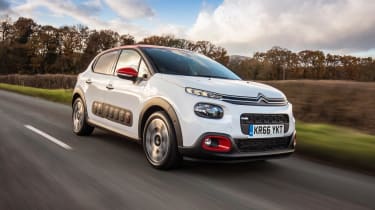 Rivals for the Citroen C3 include the UK's best-selling car, the Ford Fiesta, while models such as the VW Polo, Vauxhall Corsa, Hyundai i20, Kia Rio, Skoda Fabia, SEAT Ibiza, Mazda 2, Peugeot 208 and Renault Clio are all in the mix. However, the C3's unique style means it offers something distinctly different to its rivals in the class.

Running gear includes a platform that is a development of the C3 Mk2. That's no bad thing as it provides a comfortable ride, while the more important running gear, such as the engines and gearboxes, are a lot fresher and offer good everyday running costs.

Petrol power comes from Citroen's versatile 1.2 PureTech three-cylinder engine. Here it comes in 83 and 110 guises, and the latter gives the C3 great performance, while economy is on a par with the less powerful engines courtesy of standard-fit stop-start. Diesel power is taken care of by a 1.6 four-cylinder, although a range revision at the start of 2019 saw this offered solely in BlueHDi 100 guise.

All C3s are front-wheel drive and come with either a five or six-speed gearbox as standard. If you want an auto, your only option is to pick the PureTech 110 petrol in a top-spec trim, where an EAT6 auto is offered.

For an alternative review of the latest Citroen C3 Hatchback visit our sister site carbuyer.co.uk