Production of the Renault Kadjar and Captur could move to Nissan’s Sunderland plant, it has been reported.

Nissan and Renault – which have a strategic partnership with each other as well as Mitsubishi – are thought to be in talks around moving production of the two Renault SUV models from Spain to the UK.

This move, according to the report in the Financial Times, would be made with the aim of increasing output from the Sunderland plant, which is set to resume production in early June. The factory has the capacity to produce 500,000 vehicles a year, but only built 350,000 in 2019.

Transferring production of the Kadjar and Captur from Spain to the UK would represent a show of faith in post-Brexit Britain from Nissan, with the company recently having invested £400 million in the plant. 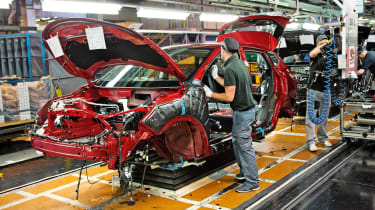 The Renault Kadjar and Captur sit on the same model platforms as the Nissan Qashqai and Juke, both of which are already built at Sunderland, so the move would make sense. That said, it has yet to be confirmed.

If the move goes ahead, it is expected to be announced later this month, along with a number of other measures for restructuring Nissan’s European operations. The firm’s Barcelona van plant could be closed, with Navara pick-up production moving to South Africa and the e-NV200 van replacement potentially being built at the Renault plant in Maubeuge, France.

Around 3,000 of Nissan’s 5,000 employees in Spain have already been temporarily laid off due to the coronavirus crisis.

What do you think about the move? Tell us in the comments…