BMW will launch an updated version of the M5 performance saloon during the summer of this year. It will follow the revised version of the standard BMW 5 Series into showrooms, featuring a range of cosmetic tweaks and technology upgrades.

These latest spy shots show a BMW test mule at the Nurburgring. It shares the same minor cosmetic updates as previously spied prototypes, with new front and rear bumpers, a reprofiled bonnet and a reworked bootlid. 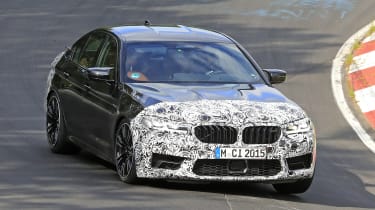 Unlike previous development cars, though, this M5 mule sports a new pair of kidney grilles, fitted with a fresh set of sharply angled vanes. BMW will also fit a pair of new LED headlamps, with redesigned daytime running lights, indicators and main-beam units.

Equipment upgrades will be equally modest. BMW’s latest 12.3-inch iDrive infotainment system will feature, (as in the new X5 and X6), along with a pair of sports seats, a sports steering wheel and a handful of trim, paint and upholstery updates – all of which will help keep the M5 competitive with the forthcoming Mercedes-AMG E 63 and new Audi RS 6.

The facelifted BMW M5 will be powered by the same twin-turbocharged 4.4-litre V8 engine as the outgoing model, and its output of 616bhp and 750Nm of torque will likely remain unchanged. The new BMW X5 M, X6 M and M8 Competition – all of which were released after the pre-facelift sixth-generation M5 – use the same engine in an identical state of tune.

What do you make of the updated BMW M5? Let us know in the comments section below…