The second-generation Vauxhall Mokka is being pushed through the final stages of its development cycle, with this latest suite of official images giving us our best look yet at the all-new crossover. When it goes on sale in the UK in early 2021, Vauxhall’s refreshed compact crossover will act as a rival for the Ford Puma, Nissan Juke and Renault Captur.

The modest camouflage worn by the prototype in these latest official images is a deliberate tactic from Vauxhall and its sister brand Opel, as they sought to kick-start early momentum for the new model by showing how big a departure it will represent over the previous car.

The prototype demonstrates that Vauxhall/Opel’s design team – still led by Briton Mark Adams – is keeping the car lower and wider than the first-generation Mokka, and taking several key styling cues from the well received GT X Experimental concept, which was first revealed in autumn 2018. 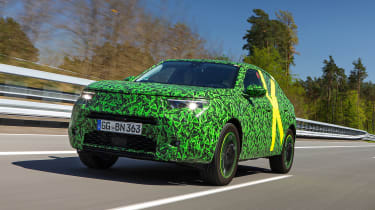 In particular, the GT X’s wider, flatter front end looks set to be adopted, and Vauxhall/Opel’s designers are trying to retain as much of its roofline as possible. However, the detailing around the prototype’s C-pillar shows that they’re also trying to keep some headroom for rear-seat passengers.

The GT X concept featured a dramatic ultra-wide display across the top of the dashboard – but, while we would expect a digital instrument panel to be standard on many versions of the car, it’s likely to be offered in conjunction with a more conventional central infotainment display, of a new design familiar to other PSA models but new to Vauxhall.