New images of the upcoming Maserati MC20 supercar have been revealed, however the new model, which will be used to return the brand to motorsports, remains delayed.

The new teasers partly reveal a prototype, but a new livery has been applied that pays tribute to the late Sir Stirling Moss.

The British racing legend drove a Maserati 250F in the 1956 Formula 1 season and for a number of races in the 1957 championship, which was won by Juan Manuel Fangio in his 250F.

The livery applied to the MC20 is inspired by a different Maserati racer piloted by Moss, however. The white, black and red colour scheme is an homage to the 420M/58 ‘Eldorado’ car raced by Moss at the 1958 Race of Two Worlds championship at Monza.

The reveal date of the new Maserati MC20 has been postponed due to the current coronavirus pandemic. Originally due to be revealed in Modena this month, the brand’s first supercar since the MC12 will now be shown to the public in full in September at the earliest.

Few details can be drawn from the official images published so far, although the car’s dramatic mid-engined coupe profile and elements of the aero package are clearly visible. 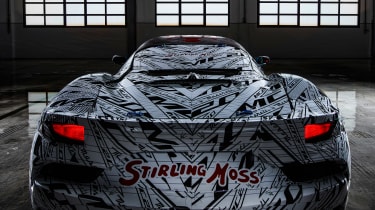 Set to be the first car since the limited-run MC12 supercar of 2004 to carry the Maserati Corse badge, the MC20 is claimed to be a “natural evolution” from the Enzo Ferrari-based V12 supercar. That is believed to be a tacit hint at the level of performance the two-seat supercar will offer.

It's not known exactly what will power the MC20, but the car-maker has ruled out borrowing a powertrain from stablemate Ferrari and has confirmed it will develop its own engine at its Innovation Lab in Modena. To that end, the MC20 is tipped to be launched with a high-performance V8, or plug-in hybrid V6 that will be followed by an advanced all-electric powertrain that has already been seen testing.

When the electric version arrives, it could be based on the powertrain of the Alfieri concept: a three-motor, 800-volt battery-electric system. If true, the electric MC20 could smash the 0-62mph sprint in less than two seconds.

Maserati has also confirmed that the MC20 will be manufactured at its Viale Ciro Menotti plant in Modena, which has recently been modernised to prepare it for electrified vehicles.

No further information has been revealed about the Maserati MC20, which stands for Maserati Corse ('race' in Italian) and 2020, other than to say that the famous Italian brand will use the MC20 to “return to the world of racing”.

The MC20 race car will have a lot to live up to if it’s to match the old MC12's circuit record. That model earned numerous victories and championship titles in world championship GT sportscar racing between 2004 and 2010.

Are you looking forward to Maserati returning to the supercar world stage? Let us know your thoughts in the comments below…