Our spy photographers have spotted a long wheelbase version of the facelifted Jaguar XF undergoing testing on UK roads. It will make its debut later this year for Chinese buyers only, with the standard length XF saloon and XF Sportbrake estate, that have also been spotted, catering for UK and European customers.

Both the BMW 5 Series and Mercedes E-Class – the Jaguar XF’s main rivals – are available with stretched bodies in China, where there’s a market demand for extended wheelbase versions of conventional European saloons. They’re all designed to be chauffeur-driven, hence granting the owner of the vehicle extra space to spread out.

The pre-facelift second-generation Jaguar XF was also available as an extended wheelbase model in China, with Jaguar’s engineers adding an extra 140mm of bodywork between the axles – unlocking an extra 157mm of legroom for rear-seat passengers.

As such, this new, extended wheelbase XF should retain the same proportions as the outgoing model, while adopting the same number of styling and technology revisions destined for the updated standard-length saloon.

The heavy cladding on all of our spied mules makes it difficult to pinpoint the XF’s exterior revisions. However, if the XF follows the trend of the recently refreshed XE saloon, the updates should be fairly subtle, stretching to a pair of slimmer headlamps, new LED lighting graphics, a fresh radiator grille and a pair of reshaped bumpers. 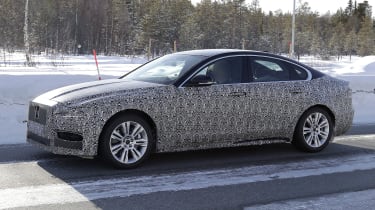 The XF Sportbrake will also receive a subtly reshaped tailgate, while the bonnet fitted to our most recently spied mules seems to have a more prominent power-bulge along its centre. Buyers should also be offered an updated colour palette, as well as a couple of fresh alloy wheel designs.

The Jaguar XF’s interior revisions will be more thorough. Each of the brand’s most recent models have benefitted from a massive technology upgrade, moving to Jaguar’s new Touch Pro Duo infotainment setup. The system will replace the XF’s aging eight-inch touchscreen and rotary knobs with a 10.2-inch central screen and a secondary display for climate control functions.

Like the XE, the XF’s analogue dials will be replaced with a customisable digital instrument panel. Jaguar’s “Clearsight” rear-view mirror should also feature, allowing the driver to to switch between a conventional mirror and images relayed from a rear-facing camera, giving the driver a wider angle view, which is less affected by adverse weather and unobstructed by rear-seat passengers.

Details on powertrain updates remain scarce, but the new XF is likely to have a similar engine line-up to the current model. Buyers will be offered the same mix of four- or six-cylinder units, ranging in output between 161bhp for the entry-level diesel and 296bhp for the flagship V6-engined petrol model.

A simplified trim level system, as used elsewhere in the Jaguar range, is also likely to be introduced. Buyers will be offered the choice of either a comfort-biased base model or sporty, R-Dynamic variant as a starting point, which they can then choose to upgrade with JLR’s S, SE or HSE option packages.

What does the facelifted Jaguar XF have to beat? Here’s our list of the best executive cars on sale now…