Cupra, SEAT’s performance-focussed brand, could soon launch a hot version of the el-Born EV. The Spanish brand has recently filed trademark applications for both the “Cupra Born” and “Cupra el-Born” nameplates.

The Cupra el-Born would be based on the Volkswagen Group’s dedicated MEB electric underpinnings. Unlike the standard SEAT el-Born, though, this Cupra variant should feature a more powerful electric motor, supplied by a larger-capacity battery pack.

Specifications for Cupra’s hot el-Born are yet to be confirmed, but it could feature a modified version of the 302bhp electric powertrain found in the ID. Crozz concept, which uses a 77kWh battery pack. A SEAT spokesperson told Auto Express: “We do not comment on future products.”

SEAT executives have previously confirmed that the standard rear wheel-drive el-Born will have “up to 201bhp” and a 0–62mph time of 7.5 seconds. We’ve also been informed that the  Volkswagen Group’s 62kWh battery pack will also be available, providing a range of up to 420km (roughly 261 miles) on the WLTP test cycle.

The standard electric hatchback will also be available with more modest power outputs, powered by smaller battery packs and lower price-tags. In addition, both versions of the EV should offer support for 100kW DC charging, allowing them to recover an 80 per cent charge in as little as 47 minutes.

Our previously spied mules suggest that the production model el-Born will retain a similar profile to the Volkswagen ID.3 hatchback and the SEAT el-Born concept, which made its debut at the 2019 Geneva Motor Show. When it enters production, it will take on established battery-powered C-Segment models such as the Nissan Leaf and Kia e-Niro. 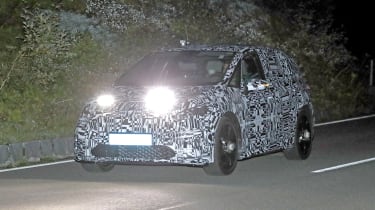 Styling features include a short bonnet, a fared-in radiator grille incorporating some neat triangular patterns, large front quarter light windows and a large tailgate spoiler. The C-pillar is also likely to be blacked-out, to give the impression of a “floating” roof.

The el-Born concept looks similar in length to a SEAT Leon, but it rides on larger wheels up to 20-inches in diameter. Like all of the Volkswagen Group’s MEB cars, the el-Born also has a long wheelbase relative to its overall length – which should allow it to deliver the interior space of a car from the class above.

The performance-focussed Cupra el-Born will likely feature the same range of sporty styling cues as the forthcoming Volkswagen ID.3 R, with a lowered ride-height, unique alloy wheels, aggressive front and rear bumpers, wider side skirts and a larger rear spoiler.

We’re yet to see the interior of the production-ready SEAT or Cupra el-Born, but the concept which was unveiled at the 2019 Geneva Show – as well as the already revealed Volkswagen ID.3 – gives us a decent indication as to how it’ll look.

Like the Volkswagen’s cabin, the el-Born will be both modern and functional inside, with a digital instrument binnacle, a floating 10-inch infotainment screen and a touch-sensitive strip which controls the car’s heating and ventilation. Boot space should be on par with the existing Leon, but expect more legroom for rear seat passengers.

Should the el-Born follow the ID.3’s principle, its pricing should start from around £26,000 – or the equivalent to a well-specced diesel-powered Leon.SEAT has stated that it will be the second of the VW Group brands to bring an MEB car to market, following the ID.3. To that end, the first el-Borns are likely to arrive in SEAT dealers towards the end of 2020.

Now read all the latest on the recently launched Volkswagen ID.3 hatchback…