The Vauxhall Crossland X is a spacious, practical and economical family car that offers loads more style and desirability than the previous Meriva MPV. If you avoid the top-spec engine and trim combinations, the Crossland X is a well-equipped and good value Nissan Juke rival with bags of space for growing families.

While Vauxhall may claim the Crossland X is an all-new model, it’s effectively a replacement for the now-defunct Meriva MPV. The first model born out of PSA Peugeot Citroen’s European buyout of General Motors, the Crossland X is based on the Peugeot 2008 and comes with a range of shared engines and gearboxes.

The Crossland isn't so much a bold 4×4, but more of a functional model aimed at young families with an active lifestyle. The larger Grandland X is also available, taking on cars like the Volkswagen Tiguan and Mazda CX-5.

Despite bidding to fill the space between MPV and SUV, the Crossland X has laid on the style, and comes with a variety of trims as well as personalisation options to tune the car to your tastes. There’s only one bodystyle to choose from, but specs range from the basic (but still well-equipped) Griffin trim, then SRi Nav, Business Edition Nav, Elite and the top-of-the-range Elite Nav.

Buyers can choose from an entry-level 1.2 litre petrol engine, as well as two turbocharged units and a pair of diesels. As the Crossland X is aimed mainly at retail customers, Vauxhall expects the turbo petrol engines to sell well – although the diesels are likely to prove popular also. Entry-level cars use a five-speed manual gearbox, though the range-topping turbo petrol and high-output diesels use a six-speed. An auto option is also available for the most powerful petrol and diesel models. 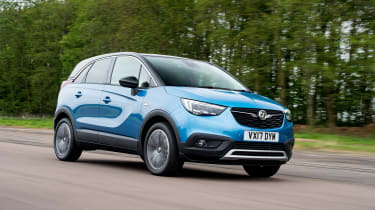 Rivals span far and wide, from the Peugeot 2008 on which the Crossland is based, to the venerable and hugely successful Nissan Juke. Other models you should consider in this market include the Renault Captur, Citroen C4 Cactus and SsangYong Tivoli, while bigger cars like the SEAT Ateca may also be within reach on a competitive PCP deal.

For an alternative review of the latest Vauxhall Crossland X SUV visit our sister site carbuyer.co.uk