Kia has confirmed it will launch an all-new electric crossover next year, based on the Imagine concept first seen at the 2019 Geneva Motor Show. Internally known as the Kia CV, it will act as the brand’s halo model and introduce next-generation charging technology and an all-new platform made specifically for electric vehicles.

It will be the first production vehicle built on the Hyundai Group’s brand-new E-GMP dedicated electric underpinnings. The crossover will also take advantage of Kia’s recent tie-up with electric expert Rimac to offer “incredible” performance, which will later trickle down to more mainstream models in Kia’s line-up.

Kia bosses have confirmed that the upcoming EV  will have “around 300 miles” of range and offer a “sub-20-minute recharge time.” The crossover’s E-GMP platform will also feature the same 800-volt technology as the Porsche Taycan, and will work with IONITY’s 350kW fast-charging network.

The Korean firm is also plotting a hot version of the EV, which is set to rival the Taycan on a performance level. Kia Motors Europe COO Emilio Herrera told Auto Express: “We will have in the new EV a high performance vehicle like an e-GT.”

Kia is keeping the rest of the E-GMP platform’s technical details and performance specifications a secret for the time being. However, we do know that the platform is scalable and has been designed to cover several segment and body styles. 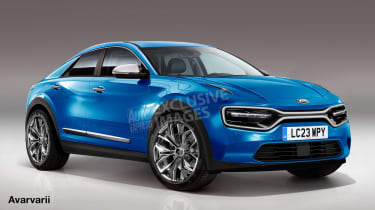 The car’s styling will take inspiration from the Imagine by Kia concept, and is previewed in our exclusive images. The production model should take the form of an unconventional C-segment SUV with a stylised interpretation of the company’s trademark “Tiger Nose” grille and a sharp, fastback-style rear end.

During the launch of the Imagine concept at the 2019 Geneva Motor Show, Kia’s then chief designer, Luc Donkerwolke, suggested that little would need to change between the show car and the production-ready crossover. He said: “I don’t see anything that’s really not feasible. There are some cost-related issues that have to be validated; but it hasn’t been done by designers who don’t understand how to build a car for production.

“[The Imagine by Kia concept] is not a free exercise. It’s not just a last-minute car for Geneva. It has a purpose. This is more business than show. We are definitely not entertaining here, but actually communicating with our customers.”

Kia’s EV plans: What to expect next

Within the next five years, Kia plans to increase its line-up of battery electric vehicles from two to eleven, while aiming to increase its global EV market share (excluding China) to 6.6 per cent. The company also aims for eco-friendly vehicles to account for 25 percent of its sales within the same period.

Carlos Lahoz, Kia Europe’s marketing director, commented on the product strategy, saying: “It is important to make a statement. Every manufacturer needs a halo car that sets the pace for whatever is coming. We are going to launch 11 [electric cars] by 2025, and this is the first stepping stone to what the new Kia is going to offer to consumers.”

Lahoz admitted that Kia is not a premium brand, however, and that it has no aspirations to become one. “We need to be faithful to our roots,” he said. “We are mainstream. But why do consumers need to pay premium prices to get state of the art technology?”

What do you make of the all-electric Kia CV? Let us know in the comments section below…