Lotus has released a new cluster of special edition versions of the Elise, consisting of four specially liveried models paying tribute to the marque’s racing history.

Each of the Lotus Elise Heritage Editions come in a colour scheme aping a classic Lotus racing livery and boast additional standard equipment over the baseline Elise Sport 220 that it's based on. No chassis or engine changes arrive, however, with power staying at 217bhp from a supercharged 1.8-litre four-cylinder engine.

Only 100 units will be produced for selected international markets, with buyers able to choose from any of the four liveries Each one will come with a unique numbered build plaque affixed to the dashboard.

All four liveries are based on successful Lotus Formula 1 entries. A black and gold scheme is a take on the brand’s iconic ‘John Player’ racing colours associated heavily with the 1972 championship winning Lotus 72D, driven by Emerson Fittipaldi to five race victories, while a red white and gold finish apes Graham Hill’s title winning 1968 Type 49B. 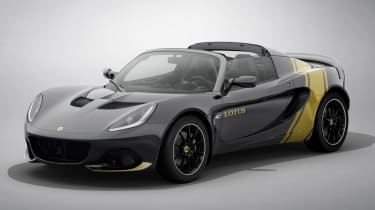 Also, a blue, red and silver scheme based on the firm’s 1980 entrant – the Type 81 raced very briefly by Nigel Mansell – is available. The final colours are based on the blue and white Type 16 from 1960, which was the first Lotus F1 car to achieve pole position and a race win, driven by the late Sir Stirling Moss at that season’s Monaco Grand Prix.

Prices for any version begin from £46,250, which is a premium of £6,350 over a normal Elise Sport 220. However, Lotus claims that spec for spec, the Elise Heritage Edition features more than £11,735 of optional extras. An options list for the new limited edition car exists, consisting of a fibreglass hardtop roof, lightweight lithium-ion battery and titanium lightweight exhaust.