We’d pick the V60 estate over the S60 saloon as a family car, but that’s not to say that our S60 is impractical. The clever plug-in hybrid tech doesn’t impinge on space inside too much.

It’s easy to fall into the trap of thinking about the Volvo S60 T8 purely in terms of its plug-in hybrid powertrain. Thanks to its turbocharged and supercharged petrol engine turning the front wheels via an eight-speed automatic gearbox while a battery-fed electric motor drives the rear axle, I’m constantly aware that there’s a lot going on under the skin of this car.

Even the impact that I can have on the S60’s performance and fuel economy just by remembering to plug it in underlines how central Volvo’s clever hybrid tech is to the car.

However, it’s time to pop on the sunglasses to shield our eyes from all that dazzling tech, and examine the car in terms of what it actually delivers from a practical standpoint.

There’s no doubt that saloons have suffered a dip in popularity in the age of the high-riding SUV. I’d be the first to admit that the V60 estate would probably have been my choice if asked to pick between the two compact executive Volvos, but the sleek S60 is not impractical as a family car.

The boot capacity is 390 litres – 52 litres down on the non-hybrid S60 models and 139 litres down on the V60. It has quite a small opening, too, so I often end up having to duck down and reach inside to grab at items that have rolled to the back. Volvo supplies a leather-effect holdall that keeps charging cables tidy, but that’s the only storage for them. You can cram both of the cables (household and fast charging) into the bag, but it is a bit of a squeeze.

We’ve had a couple of kid’s bikes and an 1,800mm long sheet of plasterboard in the boot with the seats down, but there’s no question that an estate gives you a lot more flexibility. For supermarket shopping there are neat bag hooks that fold down from the boot ceiling as part of the Convenience Pack (now called the Versatility Pack and £275) to stop your carrier bags going AWOL on the way home.

The rear seats are very comfortable for two adults, with plenty of legroom behind all but the tallest front seat passengers. Headroom is a little bit more of an issue, because there’s not much to spare for anyone over six feet tall. As my mother-in-law will testify, the middle seat is narrow and further compromised by a very bulky tunnel down the middle of the car, which is where the S60 T8 locates its batteries.
The middle seat back folds down into a nice wide armrest, but there’s nowhere for back-seat passengers to put drinks without risking them falling over.

In the front there’s more comfortable seating with a wide scope of adjustment. The S60 is a great long-distance car; we’ve done five or six motorway trips over 150 miles in it now, and the way you can tweak the steering and seat position is central to this. The chairs are firm with just the right amount of lateral support, too.

Again, there isn’t an abundance of storage with only a shallow smartphone tray under the centre armrest, thanks again to those batteries running down the car’s spine, and a couple of small cup-holders. If you like to ‘go large’ at your local fast-food emporium, you’re out of luck. Average-sized door pockets and a glovebox that can only take a few items in addition to the manual complete the range of options, so chunky items end up in the passenger footwell or slung on the rear seats.

Lastly, the car is very easy to drive. The view out to the rear is good enough, but I tend to rely on the excellent 360-degree parking camera. In combination with the rear cross- traffic alert, it’s a great aid when reversing out of our narrow driveway onto a busy road.

The T8 can be hesitant when delivering its considerable power and is slow to correct rear-wheel spin when pulling away on loose surfaces, but that complex powertrain is user-friendly in everyday driving.

Our Bursting Blue Volvo S60 is now well bedded-in to life as an Auto Express fleet car, and a clearer picture has emerged around the crucial question of how much this plug-in hybrid actually costs to run.

As you’ll no doubt be aware, the thorny issue of plug-in hybrid fuel economy hinges to a huge extent on the balance between petrol and electric running that your personal commitment to charging and type of driving allow you to achieve.

The car has an official electric range of 36 miles and we’re finding that you can get into the high twenties consistently before a full battery charge has elapsed. The way Volvo’s T8 plug-in hybrid system works, however, sees the petrol engine spring to life if you show anything approaching exuberance with the throttle pedal, even in the most electric-biased ‘Pure’ driving mode.

That means, although it can complete 36 miles of the official WLTP tests in pure EV mode, achieving genuine electric-only driving in the real world requires the patience of a saint and the right leg of an elderly mouse. Adopting this ultra-gentle approach could see owners who only ever do 25-mile round trips get close to the car’s official 122mpg combined cycle economy. In practice, we’ve been getting around 70mpg while the battery has life left in it, but around 25-30mpg when it runs out.

This isn’t bad for a near-400bhp compact executive saloon and over our time with the S60 we’ve consistently averaged economy in the mid-forties, doing lots of short journeys with at least one trip of more than 60 miles every week and frequent home charging. A typical recent effort saw 316 miles between fills, covered at 47mpg, with 79.5kWh added to the battery in several top-ups. 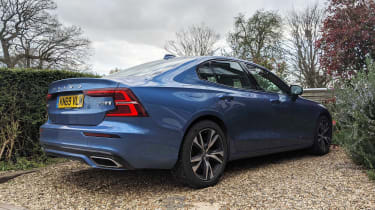 Of course, 47mpg is nothing to write home about. You could reasonably expect to better it in one of the S60’s diesel rivals, but it’s possible for executives on a company car plan to access savings that look far less compact. Under the new company car tax regime that comes into force from 6 April, an S60 T8 Polestar Engineered in the same spec as ours will cost a 20 per cent taxpayer just over £1,500 a year in Benefit-In-Kind contributions (or £3,000 for a 40 per cent taxpayer). An equivalent S60 T5 petrol model costs more than £2,533 if you pay 20 per cent tax, and £5,200 for higher-rate earners. You can drive into the London Congestion charge zone for free, too.

Despite the £56,000 asking price, the costs associated with running an S60 T8 can stack up nicely for company car users doing lots of short trips with charging opportunities at either end. And when you put the financial aspect to one side, you’re left with a very rewarding car to get around in.

Ironically, this flagship S60 is probably at its best on the long cruises that deliver the worst efficiency. The ride stays unruffled and noise levels in the cabin keep occupants feeling that way, too. From the wide, supportive seats with their big range of adjustment, comfort levels are top notch.

The substantial weight of the T8 model (1,960kg) helps it to feel planted and composed on twistier roads and the ride quality remains good on the 18” wheels we have fitted. We would, however, advise against stepping up to 19” items on the options list to stop things getting too choppy.

What you don’t get from this car is a driving experience that can match the expectations stirred up by the 400bhp total power output and the 4.4s 0-60mph time. The sluggish response to throttle inputs, while the electronics governing the motors and gearbox shunt drive around, takes the edge off things, as do the less-than-direct steering and the general sense of all that weight moving around under you.

Performance is exhilarating in our Polestar Optimised version once the 314bhp petrol engine and 87bhp electric motors are up and running it’s just not available as promptly as you’d want in a truly sporty saloon.

On the face of it, the plug-in hybrid car is an attractive compromise between the practicality and familiarity of internal combustion and the low costs and emissions of pure-electric power. However, there’s been a fair bit of controversy swirling around them, and that’s partly why we’ve made room on our fleet for Volvo’s handsome S60 T8.

This is a plug-in hybrid compact executive saloon, and this part of the market is where the tax advantages of a plug-in model make cars like the S60 T8 particularly compelling to business users. The controversy centres around the fact that the impressive official economy and emissions figures (they’re 122.8mpg and 42g/km for this car) hinge to a great extent on the way they are used.

Some initial tests on our Volvo suggest that S60 T8 owners who rarely plug their cars in could be seeing less than 35mpg in the real world – about what you’d expect from a saloon car like this with a 314bhp 2.0-litre petrol engine and a 1,960kg kerbweight. And yet the car slots into the lowest Benefit-in-Kind (BiK) company car tax band and is exempt from the London Congestion Charge. Of course, if it’s fully charged every morning and you drive 20 to 30 miles to work on electric power, then top up the batteries for the journey home, you could be running a car with zero exhaust emissions.

We fully intend to get to the bottom of the S60 T8’s merits and pitfalls as a plug-in hybrid over the course of our test. But we’ll also analyse its credentials as a challenger to the Germanic triumvirate of the BMW 3 Series, Mercedes C-Class and Audi A4.

We headed to the Scandinavian chic showroom of Volvo Cars West London in Chiswick, where sales executive Aaron Whelan-Robinson gave us the full handover for our R-Design Plus model in Bursting Blue paint with a Slate Grey leather interior.

Our S60 also features the dealer-fitted Polestar Performance Software Upgrade, which adds 15bhp in an extra sport-focused driving mode on the car’s menu, and the Smartphone Integration kit that brings Android Auto and Apple CarPlay online. Together with the metallic paint, these add a further £2,000, taking the total list price for our car over the £55,000 mark.

That’s a sizable sum, even for an all-wheel drive plug-in hybrid with 314bhp plus 86bhp of electrical assistance that can do 0-60mph in 4.4 seconds and (on the WLTP combined cycle) between 123mpg and 176mpg.

You can get a BMW 330e plug-in hybrid for nearly £10,000 less, which looks to be a big fly in the S60’s ointment – in fact, the BMW won a recent twin test against an S60 T8 – but our experience of the Volvo so far suggests it’ll have a very good go at justifying that premium. For a start, the shape is relentlessly stylish, with R-Design Plus trim adding a sensible level of sportiness and 18-inch double-spoke wheels that we already know serve up a silkier ride than the 19 or 20-inch options. The seats are wide and relaxing in the best Volvo tradition, while the general build quality inside seems strong on first impression.

The S60 is highly convincing as a premium saloon car, and we’re looking forward to seeing if Volvo’s plug-in hybrid powertrain has the talent to back-up those sparkling numbers it posts on the spec sheet.