The Tesla Model 3 has topped the UK new car registrations charts for the month of April, but in a month that has seen the number of new cars hitting UK roads decline to their lowest level since 1946.

Tesla registered 658 Model 3s last month, placing it ahead of the Jaguar I-Pace and ever-popular Vauxhall Corsa, in a UK new car market down 97 per cent compared with April 2019.

To put the Model 3’s April leading numbers into context, March’s most popular new model – the Ford Fiesta – led the previous set of figures with 6,687 registrations at the end of the month.

In 2nd place, Jaguar registered 367 I-Paces, meaning the top two spots in the UK were both occupied by luxury electric vehicles. While Vauxhall put 264 Corsas on the road.

Tesla’s success in what has been the hardest month for the UK car market since the post-war era can be partly attributed to its contactless delivery system. Tesla has delivered a large number of its vehicles directly to customers for some years now – but with its retailers shutting on 24 March, following government guidelines, the company switched to contactless handovers at the customer’s homes or at its delivery centres, while many other manufacturers have had to suspend UK operations. 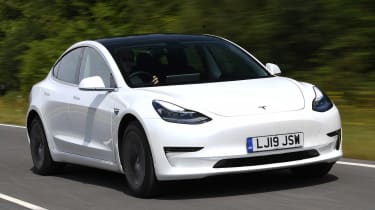 All the paperwork for the purchase of the vehicle is pre-organised via the customer’s Tesla Account online – and on the day of delivery, the vehicle is left in a safe location with access arranged via the Tesla smartphone.

Even when Tesla retail outlets were open, all transactions were processed online. Tesla has also been operating contactless servicing during the crisis, while in China, Tesla has been trialling contactless test drives, which could also roll out in the UK.

While other car makers were struggling to deliver cars during lockdown in April, Tesla continued with its contactless handovers. Auto Express reader and new Model 3 owner Denis Chick contacted Auto Express to say, “It was the most seamless, no drama purchase I've ever made. From order to virtual delivery in 6 weeks. I didn't think I would see the car for months.

“Everything was done online and an email included a confirmation of delivery document for my signature on the day. This was followed up by a phone call asking if I had any queries about the handover and wishing me a happy future in my Model 3, from an employee calling from home, in Amsterdam!

Denis’ transaction also included a part-exchange, which was also dealt with via his online Tesla account. “It was totally painless, friendly, professional and quick – it’s definitely the future!” he said.

What are the best electric cars on sale right now? Click here for our list of the top 10…