Thanks to a complete overhaul, the second generation Peugeot 5008 is unrecognisable from the previous car. That’s no bad thing, though, as it's better than ever, thanks to a fantastic interior and a composed feel on the road.

As you might expect from their similar styling, the 5008 shares much with the 3008, but of course the larger SUV has a third row of seats in the back. These can be folded down to free up extra boot space should you need it, so while the 5008 doesn’t quite match the 3008 for economy or looks, it makes up for it with the added practicality.

The 5008 is a likeable car in petrol form, but it’s in mid-spec diesel guise that it makes the most sense. It’s gutsy enough to handle a full load, offers impressive economy and is reasonably refined.

Once upon a time, the Peugeot 5008 was for sale as an MPV, but it's now an SUV. Essentially it's the 7-seat version of the 3008 – another car that used to have some people carrier DNA in its design. Look at the spec sheets, and you'll find that the 5008 has the same engines and trim lines as the 3008, with the 7-seater layout being the main thing that separates the two.

The 5008 gets different styling and a longer roof line than the 3008, while the extended rear overhang means there's space for the third row of seats. This also means the 5008 has a bigger boot when the back seats are not in use, which makes it a great choice for families that need a bit more space.

All of these attributes mean the 5008 has to take on some strong rivals in the seven-seat family SUV class. Chief among these is the Skoda Kodiaq, which has been joined by the similar SEAT Tarraco at the front of the class, although the 5008 makes a great alternative option. Elsewhere, there's the Nissan X-Trail and Honda CR-V, although both these models have smaller rear seats than the 5008. There's also the VW Tiguan Allspace, Hyundai Santa Fe, Kia Sorento and non-plugin version of the Mitsubishi Outlander.

One word of advice, though. If you're going to be using the third row of seats frequently, then none of these SUVs will be as practical everyday as a conventional MPV, whether it's a car like the Citroen Grand C4 SpaceTourer (which shares running gear with the 5008) or Renault Grand Scenic, or a van-based model like the Toyota Proace Verso. 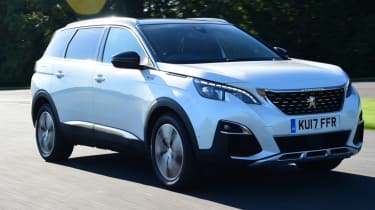 If the 5008 still sounds appealing, then you can get behind the wheel from around £28,500. This is for the entry level 1.2 PureTech 130 three-cylinder turbo petrol in Active guise. If the thought of a 128bhp 1.2-litre engine hauling a 7-seat SUV doesn't appeal, don't worry, because the unit is a torquey performer, although it might struggle with a full load.

The 1.2 PureTech is available with a choice of 6-speed manual or 8-speed EAT8 auto gearboxes, while the 1.5 BlueHDi is manual only. The more powerful 1.6-litre petrol and 2.0-litre diesel units come with the 8-speed auto transmission.

All versions of the Peugeot 5008 are front-wheel drive with no four-wheel drive option available. While that might seem daft on an SUV, Peugeot does offer its Grip Control system as an option, which adapts the traction control system to different sufaces and adds mud & snow tyres, which helps gives a modicum of off-road ability if you need it.

Active trim is the entry point to the range, but go for a higher spec and you'll get a well equipped SUV. Allure, GT Line, GT Line Premium and GT models make up the rest of the range, with all versions coming well equipped.

For an alternative review of the latest Peugeot 5008 SUV visit our sister site carbuyer.co.uk