There are few classes of car packed with more choice today than the compact crossover and SUV segment. Pretty much every mainstream manufacturer offers something for this growing market, so standing out is devilishly hard. Those looking for style, quality and a tidy drive could do much worse than the Peugeot 2008. In several ways, it’s class-leading, but crucially it’s not as practical as some rivals, while high starting prices will be a further sticking point for customers seeking the best value.

Released in 2019, this 2008 is the second generation of the brand’s supermini-sized SUV. We were big fans of the 2008 Mk1 that launched in 2013; it was decent to drive and practical, while the interior quality showed that Peugeot, whose reputation for fit and finish wasn’t exactly top notch until that point, had taken a very sudden turn in the right direction.

The latest 2008 takes another great leap forward in terms of perceived quality, with distinctive exterior styling and a fantastic cabin design. The level of solidity and of the materials used mean the car could easily be mistaken for a premium brand inside, were it not for the fact that the layout is far more daring and distinctive than the typical offerings from BMW or Audi.

There’s plenty to recommend about the way the 2008 drives, too. Like the 208 supermini, the five-door 2008 sits on the brand’s latest CMP small-car platform, but despite the new model being 141mm longer than its predecessor, it has a more rigid structure and barely adds any weight. The platform also gives the PSA group great flexibility, with the 2008 (and the mechanically similar DS 3 Crossback) available with both combustion and fully electric powertrains. 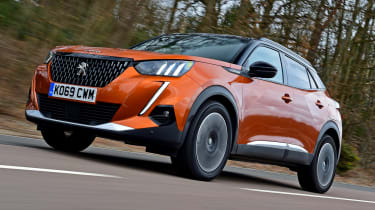 Petrol power is available in the form of the 1.2-litre PureTech unit, offered in three states of tune. The entry-level engine produces 100bhp with a six-speed manual gearbox, the mid-range 128bhp version comes with either the manual or an eight-speed automatic, while the most-powerful 153bhp variant is mated to the auto transmission.

Each of the lively petrol units offers good economy, but there’s also a 1.5-litre BlueHDi diesel producing 101bhp, that returns even better fuel economy for those covering high mileages. Then there’s the e-2008: the all-electric model boasts not only a circa-200 mile range, but a smoother, quieter, and brisker driving experience than any of the fossil fuel alternatives.

While the pros generally outweigh the cons, there is one big stumbling block that prevents the Peugeot 2008 from competing with the class best: price. While you could argue that the build quality justifies the extra expense over many mainstream rivals, that argument falls flat against competition such as the Renault Captur. The Renault feels almost as posh inside and is a little more comfy and refined, yet similarly specced versions cost roughly £3,000 less than the Peugeot.

Other options in the segment include the practical, comfortable Skoda Kamiq and the sporty, tech-laden Ford Puma. The lengthy list of other alternatives facing buyers in this sector also includes the Citroen C3 Aircross, Dacia Duster andthe DS3 Crossback,which, mechanically, is near-identical to the Peugeot. You could also go for Fiat’s 500X, the Honda HR-V, the Hyundai Kona,  Kia’s Stonic, the MINI Countryman, the Nissan Juke, the Seat Arona, the Volkswagen T-Cross and quite a few others.