The Nissan Qashqai has been a consistent feature at the top end of sales charts for years now, and this all-round package was improved further by an update in 2017 and a range of new engines and gearboxes in 2019. That said, rivals like the Peugeot 3008, Mazda CX-5 and SEAT Ateca, among others, offer strong competition in this class.

The Qashqai provides a good driving experience, with low noise levels and ride comfort emerging as its greatest strengths. Inside, the Qashqai is spacious and the build quality is decent, although the overall design isn’t as interesting as some rivals.

The Nissan Qashqai was the car that established the current crossover formula when it went on sale in 2006. For Nissan, it was a game changer. It used SUV styling combined with the dimensions of a family hatchback to create something different – a combination that proved a hit with buyers. Seeing the Qashqai's sales success, rival manufacturers have followed suit with their own models to create one of the most competitive sectors in the market.

The Qashqai Mk2 arrived in 2013, and has since had a facelift in 2017. It's still a contender in the crossover class, although it's more of an all-rounder that doesn't really excel in one area when compared to other cars in the class. The second-generation model builds on the crossover look of the Mk1 with even more rugged SUV styling and space for family life, while advanced safety tech gives added peace of mind. There's no seven-seat version this time around, although buyers do have the option of the Nissan X-Trail to consider if they require two extra seats.

The Qashqai gets particularly well-equipped as you move further up the range. N-Connecta adds 18-inch alloys, rear privacy glass and a bolstered range of driver assistance and safety systems, including blind-spot warning, intelligent cruise control and a 360-degree parking camera. Tekna models feature 19-inch alloys, a panoramic sunroof, part-leather trim and a premium eight-speaker Bose stereo with a subwoofer. Tekna+ models bring a sportier bodykit, nappa leather interior trim and extended electric adjustment of the front seats, along with unique 19-inch alloys as a no-cost option. 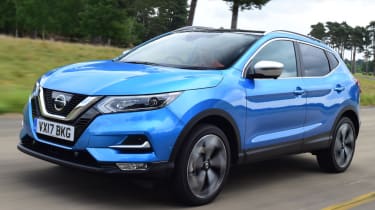 There are four engines on offer – two petrols and two diesels. Petrol power comes from a 1.3-litre DIG-T unit with either 138bhp or 158bhp, while diesels are 1.5-litre and 1.7-litre units with 113 and 148bhp respectively. The lower-powered petrol comes with a six-speed manual only, while a seven-speed DCT auto is optional on the higher-powered petrol and lower-powered diesel. Those looking for an automatic in conjunction with the 1.7-litre diesel can specify Nissan’s Xtronic CVT gearbox.

Tekna models come as standard with Nissan’s ProPilot system. This features adaptive cruise control and a smart active lane-keeping system, matching the speed of the car in front, and keeping you in your lane with subtle steering wheel adjustments.

While you have to keep your eyes on the road and hands on the steering wheel, the ProPilot setup is simple to activate with a dedicated button on the steering wheel. It’s also very well integrated, braking and accelerating with human-like levels of smoothness. It’ll bring you to a complete stop in traffic and move you off automatically, too.

While the first Qashqai was unique in its field, today there are a vast number of rivals it lines up against. Our top choices are the Skoda Karoq, Peugeot 3008 and SEAT Ateca, while the Toyota C-HR, Mazda CX-5, Vauxhall Grandland X and Renault Kadjar are worth considering, especially the latter, as it's essentially the Qashqai with a bit more space and Renault badges. Other models to check out are the more expensive Volkswagen Tiguan, Ford Kuga and Honda CR-V, while the Kia Sportage and Hyundai Tucson have attractive seven and five-year warranties respectively.