Bollinger has announced its plans to build a Chassis Cab variant of its all-electric B2 pick-up truck, designed specifically for commercial applications. Like the standard model, it’ll go on sale in America in 2021, with prices being confirmed closer to the model’s launch date.

It’ll be available in both two- and four-door body styles and will come in various wheelbase lengths to suit a range of bed attachments, such as a towing arm, a dropside pick-up bed or a box body. In addition, buyers will be able to opt for either an enclosed cab or a cutaway cab, depending on their specification.

The B2 Chassis Cab will also retain the standard pick-up’s “pass through” storage system, which comprises a pair of hatches at the front and rear of the vehicle and a channel running the length of the interior – allowing items up to six metres long to be transported safely. The system’s practicality will be limited by the bed attachment, but the bonnet hatch and cabin layout will remain the same across all variants. 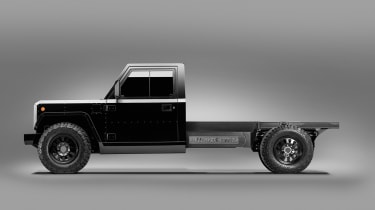 Like the Bollinger B1 and B2, the Chassis Cab’s powertrain features an electric motor on each axle, permanent four-wheel-drive and 120kWh battery pack. Power and torque remain the same at 606bhp and 906Nm respectively – although the standard pick-up’s 4.5-second 0–62mph time and 200-mile range will be affected depending on the bed attachment.

Bollinger says the B2 Chassis Cab has been designed as a work-horse. It has a maximum payload of around 2.2 tonnes, a hose-down cabin and a 10kW on-board charger which can be used to top-up power tools. It should be equally capable off-road, too, thanks to its low centre of gravity and 52-degree approach angle.

What do you make of the Bollinger B2 Chassis Cab? Let us know in the comments section below…