All eyes will be on that kidney grille when the BMW 4 Series is unveiled, and it has the potential to detract from what is an excellent two-door coupé. Hopefully it won’t and, based on this test, we can’t see the 4 Series being knocked from the top spot in its class.

The next BMW 4 Series’ styling is likely to surprise and shock when the coupé is launched this summer. Ahead of the car’s official June unveiling, Auto Express joined the firm’s development team to get behind the wheel.

These official images of the disguised prototypes hide the 4 Series’ biggest secret: the grille. Although well camouflaged in these pictures, it’s one of the boldest kidney grilles BMW has ever experimented with, stretching from the bonnet crease right down to the front bumper. It promises to be as controversial as BMW’s X7, which also features a huge grille.

We’ve tried two examples of the new 4 Series: the 430i, which uses a 256bhp 2.0-litre turbo petrol engine, and the punchy, four-wheel-drive M440i xDrive, powered by a 369bhp 3.0-litre six-cylinder turbo petrol unit. Both engines are shared with the 3 Series saloon, as is the chassis, which BMW has tweaked in an attempt to make the new 4 Series’ driving experience more compelling. The rear track has been widened by 23mm and the car’s roofline has dropped by 57mm, which helps to both drop the coupe’s centre of gravity by 21mm relative to the saloon, and cut aerodynamic drag by 0.015 points.

There’s also been a focus on increasing the car’s stiffness and rigidity to further improve its on-road behaviour. Additional strengthening has been added at the rear, while the suspension now has a unique, stiffer set-up over the 3 Series. 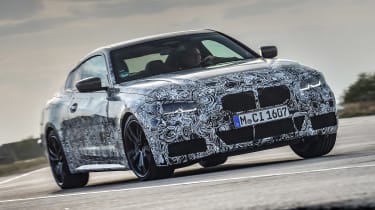 We jump into the M440i first, and are immediately impressed. You sit low, cocooned by the cabin and peering over the bonnet, concealing that powerful six-cylinder engine. On our test route, close to BMW’s headquarters in Munich, the 4 Series has no problem reaching its limited 250kmh (155mph) top speed on the autobahn. In fact the engine feels as if it has more to give.

Once off the autobahn we head for the winding roads around Hallertau, just north of Munich. This is where the two-door coupé really impresses. It feels tight and taut on faster-flowing roads and shorter than its 4.7-metre length would lead you to believe.

Adaptive chassis tech will be available as an option costing in excess of £1,000 in the UK, but it’s worth it. It gives the 4 Series a noticeably greater degree of fluidity in Comfort mode over Sport, where the car hunkers down and the exhaust note becomes a little more vocal, with pops and rumbles on the overrun.

The 430i might have a power and cylinder deficit compared with the M440i, but it’s rear-wheel drive and around 200kg lighter. As a result, it feels more precise and more manageable in the corners, thanks to the sports differential on the rear axle helping to smooth power delivery.

The 4 Series coupé will be followed by the Cabriolet next spring and then the four-door Gran Coupé next summer.