The second-generation Mazda CX-5 is available at a time when the mainstream SUV market is more diverse than ever. With talented rivals such as the SEAT Ateca and Peugeot 3008 on the scene, plus old favourites like the Kia Sportage and Volkswagen Tiguan, the Mazda has its work cut out.

Thankfully, the car has retained (and improved on) its USP of being the SUV of choice for keen drivers. It handles better than ever, but most importantly its comfort and refinement are at another level when compared to the outgoing car. Combined with a very punchy and efficient diesel engine, an upmarket interior and plenty of kit, and it's easy to see why this is one of Mazda's best sellers.

Granted, the slightly sharper design doesn't really move the game on, and some rivals still beat it for tech and practicality. But as an all-round family SUV that's both comfortable and agile, it's an excellent package.

The Mazda CX-5 is a compact SUV that's ideal for drivers who are used to owning a car that's fun drive, rather than just being practical everyday transport. It's for sale in the extremely tough compact SUV sector, and its sharp handling is one of its main selling points, although there's much more to the CX-5 than that.

As well as being a fun drive, the Mazda CX-5 offers good practicality and boot space, thanks to its larger than average dimensions. The engine range also offers good economy to go with their responsive performance.

Prices for the Mazda CX-5 start from around £27,000, but while that's a little higher than some rivals, all cars are very well equipped. Sat-nav is standard across the range, as is privacy glass, auto lights and wipers, LED headlights, climate control and full parking sensors.

The engine range comprises of one petrol engine and a diesel in two power outputs. The petrol engine is a 2.0 Skyactiv-G unit making 163bhp, while the Skyactiv-D diesel has either 148bhp or 181bhp, with the latter coming with four-wheel drive as standard. All engines are available with either a 6-speed manual or 6-speed auto gearbox. 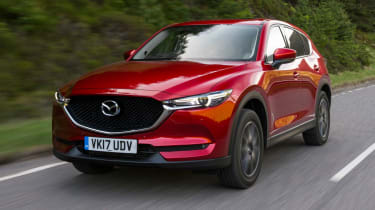 Trim levels run through SE-L, Sport and GT Sport. The petrol engine is available in all versions, while the 150PS diesel isn't offered in the GT Sport line and the 184PS diesel doesn't come in entry-level SE-L trim.

As we've mentioned, the Mazda CX-5 competes in the extremely tough compact SUV class. Its chief rivals include class front-runners such as the Peugeot 3008, Skoda Karoq and SEAT Ateca, while its slightly larger dimensions mean it's a rival for cars such as the Honda CR-V, Volkswagen Tiguan and Nissan X-Trail, although unlike those cars, the CX-5 isn't available with seven seats.

Elsewhere, the Toyota RAV4, Ford Kuga, Citroen C5 Aircross, Vauxhall Grandland X and Renault Koleos all offer a stern challenge to the CX-5, although none handle as well. Then there are dependable choices such as the Kia Sportage and Hyundai Tucson, with extended warranty cover designed to give added confidence.

For an alternative review of the latest Mazda CX-5 SUV visit our sister site carbuyer.co.uk