The Ford EcoSport has never quite managed to match the best models in the small SUV class, but credit where it’s due: the most recent facelift means that it's more of a threat to rival small crossovers than before.

In particular, that’s thanks to big improvements in the cabin brought about by a smart Fiesta-inspired dashboard. The addition of the latest technology also helps to ensure that Ford's smallest crossover no longer feels quite so out-dated alongside newer rivals.

However, it’s no closer to taking over at the top of the class. Mechanically and in terms of practicality, the EcoSport is still flawed. Clumsy driving characteristics, poor interior space and unhelpful quirks like the side-hinged rear door all blot its copybook.

Small SUVs are all the rage right now, and the Ford EcoSport is for sale to buyers who are dedicated to the Blue Oval and its products. However, we think you'd need to be a diehard Ford fan to choose the EcoSport over a wide range of talented small SUV rivals.

While the EcoSport arrived in the UK in 2014, it has been given a number of updates and revisions to help it get up to pace in the small SUV class. It has needed help, because there are a lot of tough rivals at a similar price, including the Citroen C3 Aircross, Kia Stonic, Peugeot 2008, SEAT Arona, Vauxhall Crossland X, Dacia Duster and Renault Captur.

For 2018, Ford moved EcoSport production of the European EcoSport from India to Romania, and gave the car a number of changes to make it more appealing. With Zetec, Titanium, ST-Line and ST-Line Black model variants now available, there's more choice than ever in the EcoSport line-up. 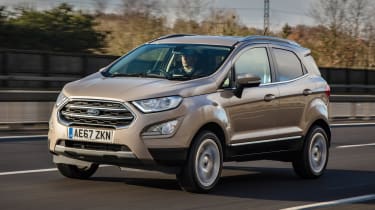 Under the skin, the EcoSport shares running gear with the last-generation Fiesta, but while that car was fun to drive, the addition of raised suspension and a tall body hasn't translated into an enjoyable drive here – although not many small crossovers are designed with driving fun in mind.

Power comes from either a 1.0 EcoBoost three-cylinder turbo petrol or Ford's latest 1.5 EcoBlue four-cylinder diesel. The petrol motor comes in 100PS, 125PS or 140PS guises, with 99, 123 or 138bhp respectively, and they all come with a six-speed manual gearbox and front-wheel drive as standard. The EcoBlue diesel has either 99 or 123bhp, with the same six-speed manual transmission and front-wheel drive, too.

The entry-level petrol engine is only available on Zetec models, while the most powerful diesel and petrol units are offered in combination with the ST-Line and ST-Line Black versions.

For an alternative review of the latest Ford EcoSport SUV visit our sister site carbuyer.co.uk