No matter how well lit your workshop is, or how bright the day, at some point you will need more light when you’re working on cars. Fortunately getting light where you want it has never been easier, because advances in LED and battery technology have seen the output of inspection lamps increase, and run times lengthen.

Cordless is the way to go, with the best lasting well over two hours, and no leads trailing across the floor or drive to trip over. Makers have also exploited the new tech to come up with innovative designs that make it easier than ever to put light where it’s needed. So which of the latest designs is the shining star? We charged eight to find out.

As designs have improved and converged, we have refined our test to find a worthy winner. We measured light output and beam spread, as well as assessing torches and the run time at maximum power. We also looked for power-saving modes, plus battery-charge and state indicators before heading under a wheelarch and bonnet for practical tests to see how easy it is to get light where it’s needed. The final factor was the price, which we obtained from online sources.

Ring’s MAGflex Slim narrowly beats the NightSearcher with its more compact size and cheaper price. Sealey makes the top three thanks to its powerful light and convenient size.

When you see how similar the MAGflex Pivot is to the Sealey it’s no surprise the two were closely matched, but the Ring just edges out the former winner here. The Ring is a smaller package, some three centimetres or so shorter when folded, but the COB (chip on board) strip still manages to push out 400 lumens. With a similar 2.6Ah Li-ion battery, it had the edge in the run time test, at almost four hours. Add in its keen price, a thumbwheel dimmer, plus charge and battery state indicator, and you have a winner.

As the name suggests, this is not just a worklight; there’s also a flashing red triangle around the 1,000-lumen centre LED. This was easily the brightest, but it had the narrowest beam, although it was wide enough. It also had a 500-lumen mode to extend battery life, but at max power we saw about three hours run time.

There’s a multi-position stand but no magnet, so it has to hang or sit. LEDs give battery and charge states, and it has a useful USB charging outlet. Less good are the nine-hour charge time and lack of a mains adaptor for the supplied power lead. But the versatility, keen price and power secure a narrow win.

The LED180 was top in our last multi-test two years ago and now Sealey has boosted the power and output of the SlimFlex design, with the 12 SMD (surface mount device) LEDs punching out 500 lumens – up from 400. Yet it wasn’t quite enough to hang on to the crown. Its beam had the edge on the Ring’s, and the light had the same easily directed twist-and-fold blade. But it shut down after two and half hours in the run-time test and had neither a battery-state indicator nor, crucially, a mains adaptor for the USB charging lead.

This high-quality near-professional unit lights a room easily with a wide beam. It’s more compact than its rivals and the rear arm includes a magnet, so it’s suitable for under-bonnet work, plus it has a hole for use on a tripod. As you’d expect at this price there’s a mains adaptor, and you can dim the beam for more run time. We saw more than 3.5 hours at full power.

You get a lot of light for your money, with 850 lumens from two COB LED strips. The light is wider and brighter than the Philips, and we liked the two-part stand that let the body rotate and fold to give more options. Run time impressed, but less good were a two-light battery indicator and just a lead for charging. Still, great performance for a cracking price. 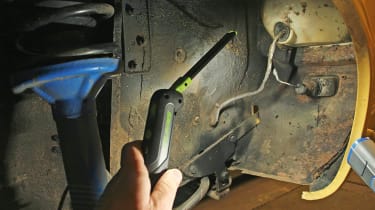 There’s no doubt this is aimed more at the pro than the DIY market, but it’s still within the reach of amateurs. It dwarfs our top two with a more conventional design that has a hinged bottom section combined with powerful magnets in the back and base, as on the Sealey and Ring. The Philips’ LEDs deliver 500 lumens, but in a relatively narrow spread. Although the light’s output can be adjusted by holding the power button, even at maximum it lasted more than three hours. A great, but not cheap, package.

Pick this for maximum light. The COB LEDs punch out 1,000 lumens – the most powerful we tested, and delivered across a decent width. The battery ducked out after 90 minutes but would last a lot longer on the 500-lumen setting. There are charge and battery-state LEDs and a hinged base, but it lacks the Philips’ handy charging dock. Power at a decent price.

Draper’s folding-blade light is almost twice the length of the Ring when closed, and nearly three times as heavy. It also has a rotary dimmer for the 7W LEDs, which is useful because their 700 lumens will flatten the battery in two hours on full power. Less good is the inability to fold completely with the LEDs on the outside, and the lack of magnets in the back.

There’s lots to like about this. It’s similar to the Draper and Philips, but adds a hinged base that also rotates. It’s smaller, too, at 18cm tall with a 260-lumen output. The light is okay in small spaces but relatively narrow. It has a basic charge indicator but the options include a dock, UK and European mains USB adaptors and one for in-car charging. It’s decent, but others have an edge.

The Tri-Spector has a tough job here, up against pure worklights while delivering a fair bit more. As a worklight it compares well with a 600-lumens and has a useful two hours-plus run time. Where it differs is the battery also powers a decent flexible light and effective spot-to-flood torch. If you can use these, then this is well worth investigating.

There’s something very old-school about this light. It has a bank of 55 LEDs, with 33 giving a white work light and the rest a red emergency or flashing light. Output was nowhere near the latest designs’, nor was the run time. There’s also just one magnet on the back, and while there is a charging dock plus an adaptor for in-car charging, these are not enough to rescue this light.

Now you can see what you are doing, why not see which is the best socket set on sale to get the job done?