Official images of the BMW 4 Series have been released, though the firm is choosing to give little away by presenting its next four-door coupe wearing a full body disguise. However, further technical information has been revealed, as the Munich brand says it is applying the “final touches” to the Mercedes C-Class Coupe rival.

We’ve already driven a prototype version of the 4 Series – both in 430i and hot M440i trims – and the early signs show a huge amount of promise. Here’s everything we know so far.

While BMW’s official images show the car wearing a heavy disguise, testing mules spotted elsewhere give us a slightly bigger clue as to what to expect once the cladding is lifted. The big talking point comes at the front, which will feature a full-height pair of kidney grilles.

Elsewhere, its styling is likely to be almost identical to the BMW Concept 4 from the 2019 Frankfurt Motor Show. Expect it to arrive with a pair of slim LED headlamps, flared haunches, and a squared-off tail 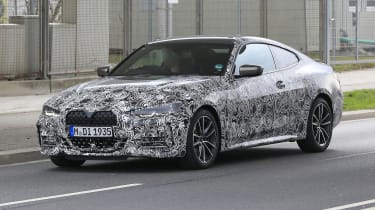 Like its predecessors, the 4 Series is based upon the 3 Series saloon, and several mechanical and structural tweaks should make it a sharper car to drive. The roofline of the coupe body is 57 millimeters lower than the four door; not only does this improve aerodynamic efficiency slightly, but also lowers the car’s centre of gravity by 21mm.

BMW has confirmed that the M440i xDrive model will also feature a 48-volt mild hybrid setup. The electric motor contributes up to 11bhp, and is claimed to improve throttle response and deliver smoother getaways from standstill. The motor is powered by a small additional battery that is charged up from energy that would otherwise be wasted during deceleration.

Above that, BMW will also engineer a flagship M4. This isn’t due until 2021, but it too will be powered by a 3.0-litre engine – one developed specifically by BMW’s M Division. Shared with the current X3M, this twin-turbocharged unit makes up to 503bhp and 600Nm. Plus for the first time in an M4, a selectable four-wheel-drive system will be used.

Official prices are yet to be confirmed for the next 4 Series, but expect to pay a small premium over the equivalent 3 Series saloon. BMW will reveal the new model to the world in June, while  a convertible version of the 4 Series in 2021.

Is the grille too big on the next BMW 4 Series? Let us know your thoughts below…